Junk with a Story to Tell

On the junkin' trail sometimes I come across things with a wonderful backstory. And, I love it when it happens - like the time I found a wonderful old, felt beanie cap with a great collection of pinback buttons from the 50's and 60's - featuring JFK and Ike, Red Cross and 4-H, and Iowa seed companies. This was obviously someone's prized possession that had been stored away probably until they died, sadly. And there it sat in a flea market tagged with a low price, as if it didn't have any intrinsic value. I bought it and treasured it, for awhile.

Now, if I can be honest with you, I feel somewhat conflicted buying these special pieces and reselling them. But it is what I do, and having seen the joy on people's faces when they got to purchase one of those historical pinbacks, made it seem like the original owner had been saving them just for that person to enjoy. Together - the original owner, the seller, and the customer - all play a part in preserving some history! 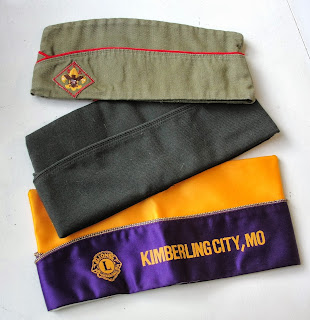 Recently I found myself in a similar situation at a nearby thrift store. I love selling vintage clothing and accessories so I was rifling through the scarf and hat bins as usual when I came across these three vintage, men's caps. --------->

At first glance, I just thought "score!" and threw them in my cart along with the other goodies. But after a full morning of junkin, while on my way home, I started wondering if these three random caps could possibly have only ONE owner. I couldn't wait to get home and examine the evidence.

The first cap, a Boy Scout one, revealed the owner's name - Carl Utte. 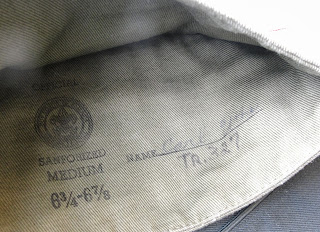 The second one was unmarked, but appeared to be US military issued, maybe Vietnam era. Could it have belonged to Carl?

And the third cap revealed a location. Was this where Carl joined the Lions organization, and retired, since Kimberling City is a retirement destination? And why were they all in the same store bin, at the same time? I don't think it was a coincidence. 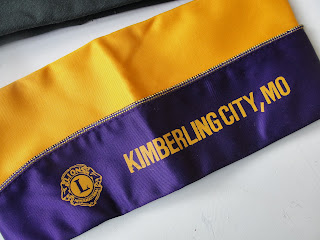 I like to think that Carl wore all three of these at some point in his life. If he did, I believe that these hats reveal that he was a GOOD man who had the honesty of a Boy Scout, the bravery of a soldier, and the giving heart of a Lions Club member.

(I did Google his name and found little information.)


Looking back on the old beanie with all the pinback buttons, I wish I had kept it all together. I wish I would have preserved it just as it was. I don't know when I'll ever come across something so special again.

But, you can be sure I'll keep trying!
See YOU on the junkin trail! Cheryl

Promote Your Page Too